D2R2 Organization Tent the evening before, 2011. The Deerfield Dirt Road Randonnée is the most beloved late summer cycling event in New England. There’s everything to like: 110 miles (~180k) mostly on stunning scenic dirt […]

Picturing the destination, half remembered images seen or interpolated from descriptions in books read while comfortable on a couch long before ever imagining I’d visit there. Reading a few other people’s packing lists and past […] 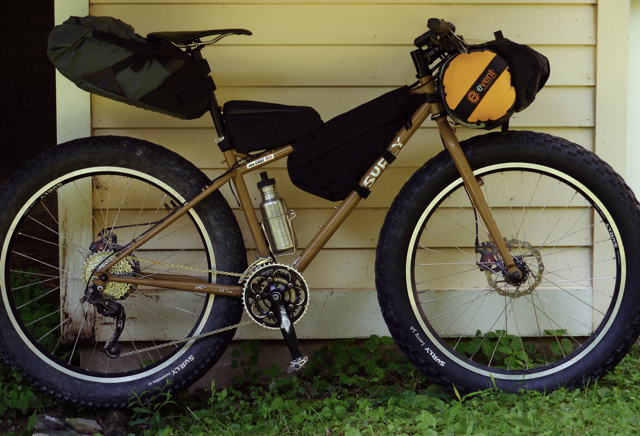 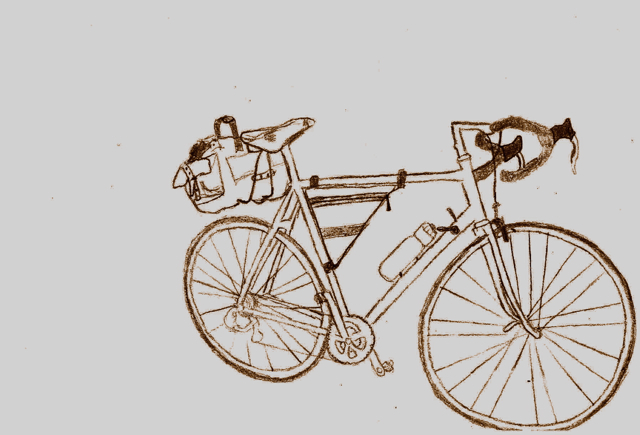 Okay, so you’re going to tour on your road bike. That’s a great idea. How do you carry your stuff?

Of course you can tour on a road or cyclocross bike. Yes, even if it is a racing bike with no dedicated attachments for racks. Even (especially!) if it weighs 17 lbs. Even if it’s […] 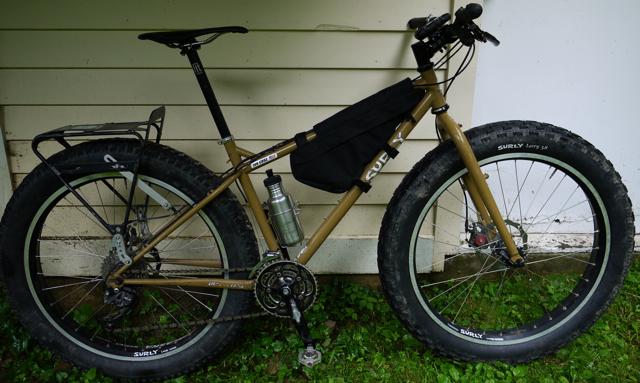 The Jandd frame pack is inexpensive, readily available, and useful for carrying tools, camera, snacks and jacket. The design, alas, does not fit well in bicycles with very small main triangles like my Surly Pugsley. If […]

I recently became curious about the answers to the following questions with respect to my fat bike, a Surly Pugsley:

1. How would it ride with a standard, not-specially-dished 26″ rear wheel and standard mountain bike tire used in the rear?

3. What would happen if an Endomorph was mounted on a standard, not-specially-dished mountain bike wheel with a Surly oversized tube, and that wheel was used on the Pugsley?

Of course, I had theories but I wanted some observations by way of confirmation. So I set out to do some experiments.

I know, I’m egregiously tardy to the party, what with so many reliable sources indicating euphoric satisfaction with Revelate (formerly Epic) designs bags. I’ve just received a custom framebag, gas tank, and seatbag to go […]

Is there such a thing? Sure, if you focus on the very ends of various spectra. There are times when there is a right bike: full suspension for high speed super chunky descents, a time […]

The LBS recently put me in contact with someone who has done a few bike tours but who “wants to travel light without being pathological about it.” The person was hoping for my comments more than just a gear list, and was also curious about the specific items for reference. It sounded like a reasonable goal to me, so I put together a list of the things I bring on a tour when I’m not trying to be ultrathisorthat. There are a thousand of excellent ones of these on-line, and I don’t imagine that mine is particularly innovative or special. Something like this inventory has served me well, though, for tours lasting from mere days to months and months. It usually comes in under 25 lbs., counting panniers but not including the minimal kit worn while actually pedaling. 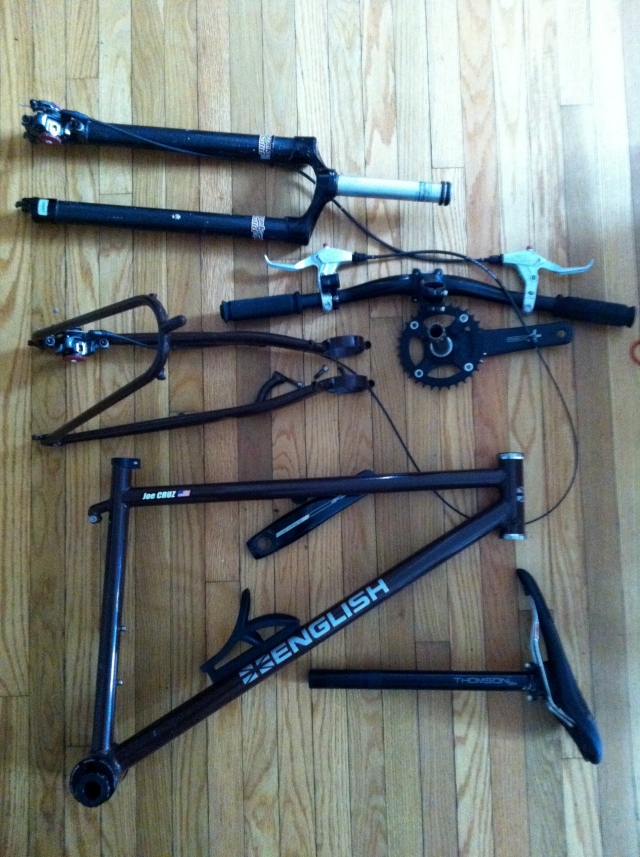 My folding 29er (custom built by Rob English) set up as a singlespeed ready for a Spring Break trip to Arizona and Utah: The plan is to split my time between Tucson and Hurricane, with […]

For my recent trip to the Middle East, I ended up leaving the Garmin 705 at home. Even though it was indispensable in guiding me to small roads in Europe and New Zealand, there are no maps for it for Syria, Jordan and Egypt. And there was little point in collecting data on distances, speed, elevation gain, etc., because, well, I don’t care. I was, however, craving street maps of the urban areas I was visiting. And while I always take along or find paper maps, having a GPS as backup to confirm that you are where you think you are on a paper map is convenient.

I had had the MotionX app for the iPhone for some time, but I was still astonished when I was able to use it to download clear and detailed maps of the region.  I loaded all of these at varying levels of resolution (Zoom setting from 6 to 15, for those of you who use the app) to store on the phone. That way, I would not need to be connected to the network to look at the maps.  All the maps together took up a few gigs. The built in GPS was then able to project my location on the maps, and do all of the things one normally expects a GPS to do. It worked brilliantly: the maps showed even alleyways and dirt roads. As a bonus — though it didn’t seem so initially — the place names at most resolutions are in Arabic. This made it so I could show the phone to locals to confirm my directions and route. Even in that mobile-jaded context, where phones are routinely used for everything and far more than ever occurs to me, several people seemed surprised that such things could be on a phone. 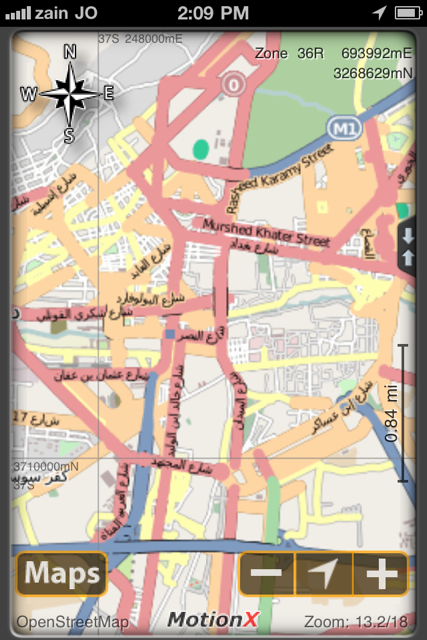 Zoomed down to the street level

I have it on diverse testimony and substantial indirect evidence that non-Yanks find peanut butter confusing if not unqualifiedly disgusting. There are perfectly banal things to say here, that these matters are cultural, one’s palate […] 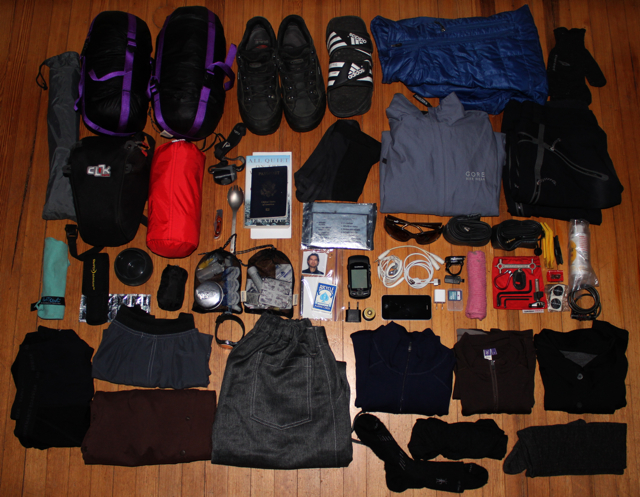 Even when I am traveling fairly lightly, I prefer to have a bit of weight in the front to balance the load. I’ve thus been experimenting with Salsa’s Anything cages on my Surly Long Haul Trucker. […]