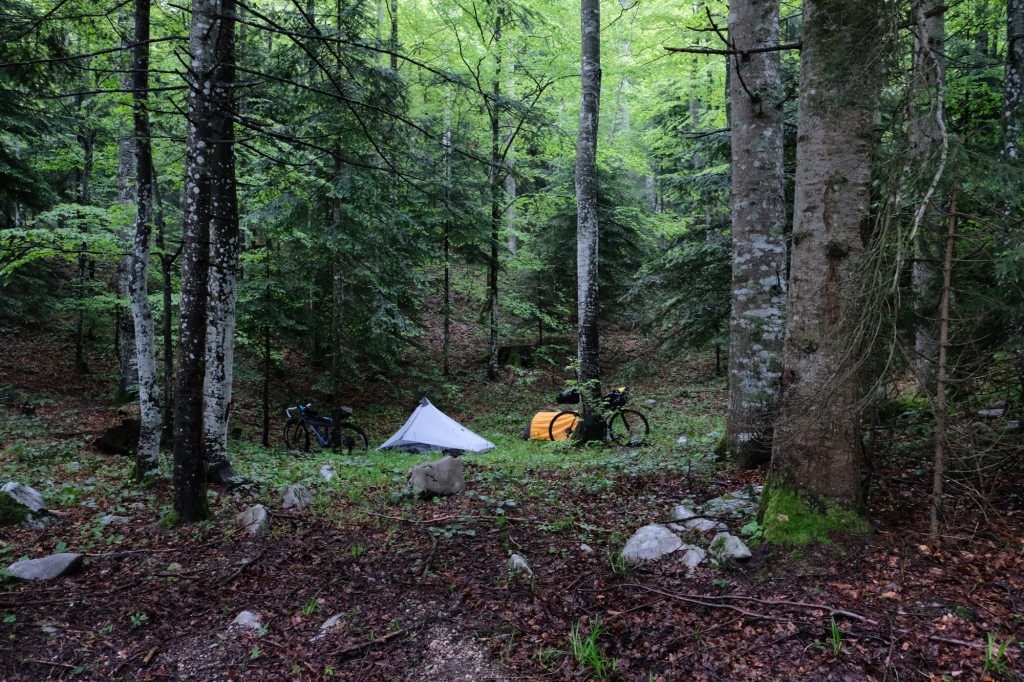 The red skull and crossbones signs on either side of trail is a claxon of an emotion between vigilance and sadness. Jack and I have ridden through landmined areas before, back during a trip to Croatia a few years ago. We’d look over the maps and the best information we had to make it unlikely that we’d reach the end of the day in a hazardous area, and our rule was that no matter what we’d ride at least a half hour past marked boundaries. The flaw in that strategy, of course, was that we wouldn’t know whether we’d be reaching a landmined area shortly ahead of us, so we would ride on to make sure of no markers and then we’d backtrack a few k.

Locals were eager to share their knowledge of dangerous spots. The recent bout of unrelenting rain adds a new wrinkle, as we were told that landmines will move along with landslides, and get pushed around by flooding. We think all the obvious thoughts about landmines, that they’re the grimmest expression of the pain of war, indiscriminate, permanent, designed especially to inflict injury on human bodies and not necessarily killing but demoralizing, maiming, leaving someone in need of serious care and with painful scars. They’re expensive and time consuming to remove. The Bosnian government’s goal and hope was to have all landmines removed by this year, but experts estimate 2025 as a new target.

Looking down at the luscious patch of ramps, we think back to the last warning we saw. It was enough awhile ago so we squat down and chomp the spicy greens, snorting at our woodland gluttony.

Stop at a bike shop in Sanski Most, Jack has worn his cantilever brake pads down to the metal carriers. The woman there is impossibly generous with her time and tools, she tells us of her years spent away from her country. Now she is taking an on-line course in art history. She shows us a sculpture that is very moving to her. A man walking in an ordinary business suit, but much of his body is missing.* There’s just enough to create a coherent human form. And she says that that is how she felt all those years abroad, as if her body was substantially and mostly elsewhere, only to be restored when she returned home, and it gave voice to something that she had so much trouble explaining. She puts her hands on palm down on the counter to help steady the Earth, her fingers dirty from handling the cables, she wants us to remember that art can be important in saying.

Juxtapositions are a unexpected source of warmth and attentiveness. Kilometers of rolling dirt paths between farmhouses, images of an idyllic shire in mist gusting half light, and then a heap of rusting military vehicles, abandoned at a crossroads like children’s toys. Concrete buildings with midcentury flat roof linearity empty, sideless, leaking, audible echoes of occupant’s goodbyes. Then manicured hamlets, we’re served tea and spirits at a long handsome table inside an A-frame mountain hut, it brings back the feeling in our feet.

Ahead on a road where we haven’t seen anyone for an hour are figures shuffling, slumped shouldered in the unkind drizzle. Up closer, it’s two young girls using gentle taps of a stick to keep their three pigs moving along. I take a quick phone snap, they part and smile and greet us with bright open delight at the bicycles, and we try to match them in our delight at the animals. This road will take us high onto a mountainside where it turns out we’ll hike-a-bike most of the evening. Like so many of the roads we’ve attempted here, it’s on maps and is implied by decades old signage, but on the ground it just disappears.

As we cross the border headed toward Zagreb, Bosnia is ten meters away but seems further. I can make better visceral sense of the pain of recovering from the civil war, of the recalibration of those returning from far away, of the half-scarred half-flourishing landscape. But it’s as if the trees and stones and streams—not the people—were weary of the task of revealing itself to us. Nor do I assume that I’m entitled to that, nor do I hold it against anyplace. Making oneself legible to others is a luxury that can detract from other kinds of investment.

At each spomenik we paused to read every name, to make sure our eyes were on each line long enough to try to sound it out. That was a different war than the one painted around us, but the anchoring in memory of a way and thoughts, that’s persistent. Bosnia was beautiful like a voice that’s singing to itself, I’m better for having overheard it.

*They are Bruno Catalano sculptures, and, incredibly, wonderfully, poignantly I would see them in Marseille just a few weeks later.

iThere are no comments