We meet up with Lael and Nick by the leakproof plan of an email a few days prior, indicating that we should meet under the gothic tower on the Charles bridge at 5pm. Except for evidently walking passed Nick on the five meter wide bridge without noticing him pushing a fully kitted bikepacking wheel—lost in the shoulder to chest crowd and perhaps when I was focused on a blind woman of dubitable talent singing hymns along to a boombox—it succeeded.

We bid our greetings, happy birthday to Lael. They’ve got the joyful mellow disposition of folks who have been on the road for a spell, they’re kind to take a break into this tourist saturated urban convolution to meet up with us. Chaos, sure, but this is Prague and its textures and history and thrum energize. Take a small walk of the main square to peoplewatch and gaze at the somewhat underwhelming mechanical figure display at the strike of the next hour by the famed astronomical clock. Then it’s off to poke fun of Czech beer during the drinking of plenty of it, the clarity of the vaulting pride in it matched by the crystalline crisp this isn’t very good. We dine at a cavernous wood and marble schnitzel restaurant, piano player entertainment, to furtive business suits and to the speakeasy revelers alike.

For stashing their bikes, my best thought is to treacle talk the guys at the local bike rental place—the kind of place where at the end of your city rental with flip flops and a sunburn you get a free bottle of water or a can of beer—to let them leave their bikes in the storage area with the rental shitespeeds and cruisers. Alex with a brit accent had deferred to his boss, and Pavel was frowning skeptical, but in the end they relent and N&L promised to grab the rigs the next morning by 9.

On their second day we tour the city in that way that is impossible on foot: covering a lot of ground, investigating cul de sacs, taking a circuit of the park, an enormous metronome, and then up to the palace and tower. Past a cracking stadium and communist era concrete block dorms, then stucco houses with orange roof tiles. A mission to Mozart’s house, ill-conceived because of its dilapidated and disrepaired state. (My idea, alas.) Along the river front and into the contrasty neighborhoods. We walk through a exhilarating Mucha exhibit and we oooh and ahh. 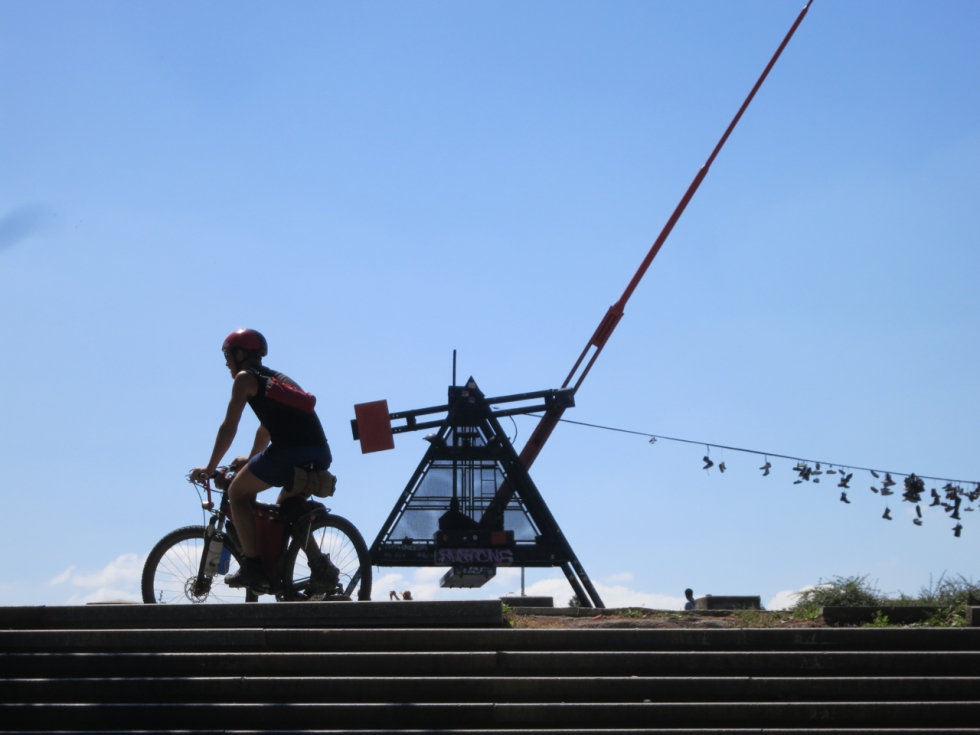 We laugh and talk and pedal. We relish their tales of bikepacking through France and lately to the Czech border. They are old friends to me, true, only known through cycling rendezvous, Alaska, New Mexico, but that has a way of generating connection. In the evening they repack and head east into the Czech countryside, vectoring toward Ukraine. We miss them.