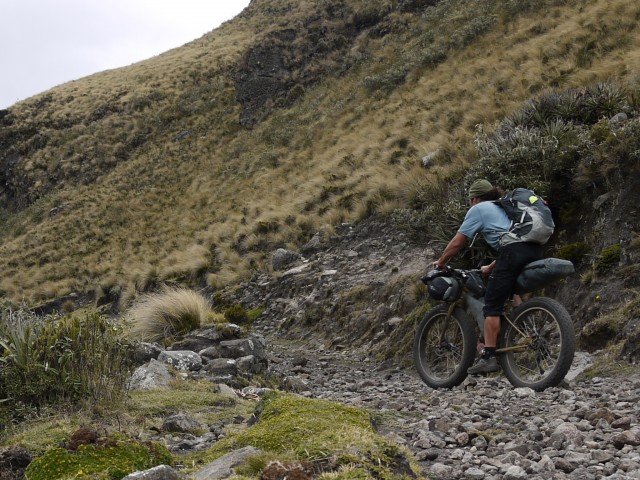 From Atillo up high on the Guamote-Macas link, I followed a series of muddy cattle cartroads to Tortoras and then a dirt section to Achupallas. The day long journey kept me above ten thousand feet with glorious views, friendly people, and inevitably variable mountain weather. Achupallas is the starting point of the longest intact section of the Inca Trail in Ecuador, which I started off on the next day. It sees a minuscule ratio of the trekkers crowding its Peruvian cousin, however. Some 45k long, trekkers typically do the Achupallas-Ingapirca walk over three days, sometimes hiring guides or donkey porters. The final arrival in one of the best preserved Incan archeological sites in the country offers a compelling place to camp.

I suspect I`m the first to bikepack this route. Locals were summarily dismissive about the possibility. Reactions ranged from “no, not possible” to “that’s ridiculous” to the charitable assumption that I was joking and an ensuing change of subject. The rising chorus of denials sounded an awful lot like an imperative, naturally.

I was often unable to see or follow the track, even though I had topographic maps acquired in Quito and thus knew fairly accurately where I was. Heading up to fourteen thousand feet, the terrain was variously babyhead chutes, soupy black mud, soaked marshland and chest high grasses. Where horses and donkeys had walked, the ruts were hub high and maddeningly narrow. The first day was primarily hike-a-bike, dragging, pushing, pulling in freezing rain, with punishing mountain gusts barreling off the peaks. At one point a cowboy materialized out of the fog. We chatted and he offered some kind of berry whiskey. Excellent, and it certainly contributed to the sense of stumbling about. Later, as it was getting dark, and not wanting to be caught up high but loathe to attempt the steep bushwack descent, I split the difference. I don`t recall sleeping that night what with the altitude and wired fatigue and the tent walls raging, leaning in all around. In the morning I meditated my shivering away, all gear soaked, and flung myself against the trail again, negotiating an endless wet section until the last pass. The finale was glorious hours of slow speed downhill problem solving through the ancient rock path, and by now I was possessed by a sort of serenity and sense of psychological flow from raw exhaustion.

If I can be motivated to, I like to take photos during perceived lowest points. Here I want to die, cry, go home. Actually, though, the moment I discovered that the bottle of yogurt purchased 10,000 feet below had blown up in my pack covering everything might have been worse.

So, it turns out it is possible, but that’s not the same as wise. 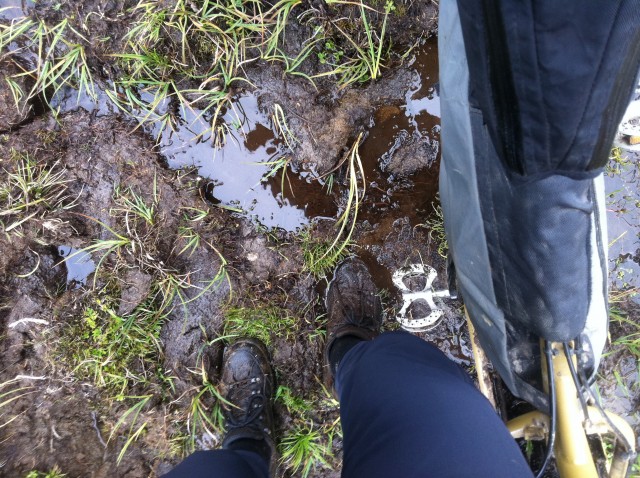 – Three topographic quadrants are relevant for the Inca Trail, the Alausi, Canar, and Juncal. Email me if you want rough PDF’s of the crucial parts. Alternatively the MotionX terrain tiles on the iPhone app are very useful. Download them before leaving home.

– The first pass involves a very narrow cut that is usually climbed two-handed by intrepid walkers. Alone with a bike it didn’t seem feasible, but there is a steep zig zagging donkey trail to the right that goes up much higher. As I was starting up this, I saw two men gathering wood about a hundred meters away on the slope. They shook their heads in the universal language to mean “omigod, you’re so fucked.”

– There is very decent lodging in Achupallas run by Ines Velez called Posada El Inganan (033012525). Great food and homey atmosphere, hot showers. Ines was the only person I talked to who accepted the bikepacking plan. She thought it was stupid, but doable. Achupallas is such a quaint place it’s worth getting there early and spending the day and night.

– I wouldn’t say a fat bike is mandatory but I was very glad to be on one in the soft wet terrain. I was less glad pushing the thing.