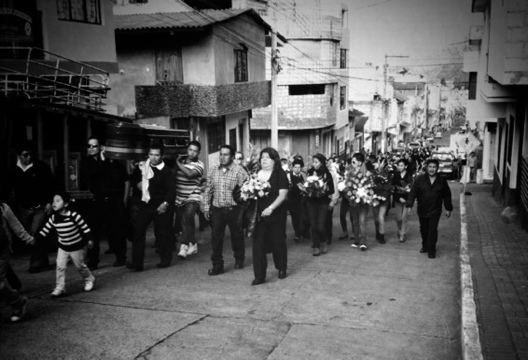 End of the day, descending into the town square next to the basilica, I am on a one-way street going in the correct direction, motorcycle red blue red lights coming towards me. Pull over, there is a slow moving car and a long procession, cask aloft by four men, people walking close in groups of two or fives, some solo in reflection, flowers, black clothing. Children swarming aunts, cousins, friends. I remove my cap, watch, nod at eyes met. It’s far from silent, a flash of laughter, a murmur of affirmation, burst of voices. In the last rank a trio of men start arguing about whether my bicycle has motorcycle tires on it, they ask me, somewhat dubiously I sense, wondering if I’ll get the question. I explain that they are not normal bicycle tires, they are for special bicycles. This satisfies everyone, they declare the wisdom in it, and they walk on, shuffling shoe heels now the only sound.

This blend of solemnity but also an acknowledgment that life is full and humorous and curious, that people walk connected at varying but never infinite distance from one another, is a placeholder for my thoughts on those I have met here. Not the full on boisterousness I’ve known, but, how to say?, always almost on the brink of it, willing for it.

Earlier, passing near a technical university. A little shop, I can’t quite tell, a garage, ten or eight in their twenties, half men half women, clink of beer laughter bottles. The gang’s extrovert calls out to me, “have a beer with us!” It would be rude to say no but I explain where I am headed, he says “oh, you’ll be there in a half hour” in the spatially distorted confusion of someone who gets around by motor vehicles (it will actually take me two hours). I circle, hop off, I drink the offered yellow can pilsener, we talk about Ecuador and bicycles, about the jungle that I’m headed to, I continue on with that dehydrated and had an ill-advised beer wobble, too quickly for real politeness, I regret it.

Relaxed, a bit shy, curious but reserved, supportive, a lot of thumbs up. Drivers are enough on the shoulder of chaos so that when I, say, ride in the median to pass traffic or weave through construction, there is no righteous judgment. Truckers and cabbies and adolescent men in fauxFastandFurious whaletail lowriders, they are all perfect, they pass close but predictably and expect me to mind myself. Others if anything are a bit too accommodating, won’t go past.

I like it that people dress up a bit, ties, smart cardigans, shiny shoes, never sneakers, jeans tight and designer. Then there is the traditional clothing — though this is a precarious phrase given the manifest imperialism of it — of villagers in the mountains. For women, black or dark green just below the knee skirt, copper or maroon sweater over a white blouse, a hat like a cross between a tyrolian and a fedora, color-matched to the skirt. Did I mention the white stockings or the black pumps? Kindergardeners to grandmothers wearing this without exception, chopping wood, running to catch a pickup truck, tending sheep.

Strangers, if they see you eating, under any circumstances including shattered disheveled and sweaty stuffing crackers with peanut butter into your mouth, wish you buen provecho, enjoy your meal. Three course lunch is usually $1,50. And so is a Snickers bar.

Soaking my tired legs in a hot springs at 10pm, I’m in the pool with the old folks pretending to read my book but eavesdropping on conversations: family, aches, holidays. I’m drawn in with the usual questions one asks a stranger. I’m told of a nephew in New Jersey but times are tough, buys houses, fixes them, sells them, everyone grimly acknowledges that now is not a great time for this enterprise in the USA, but all other jobs are closed. I ask how things are locally, depressed, too. Someone else, I can’t quite decipher the emotion behind it, maybe it’s not fully resolved, says that since dollarization — i.e., the adoption of US currency in an effort to control inflation — Ecuador is just an economic colony. I’ve wondered about the effect on Ecuadorians, eleven years on now, of taking out an Abraham Lincoln five dollar bill or an Alexander Hamilton ten to pay for gas, dinner, or groceries.